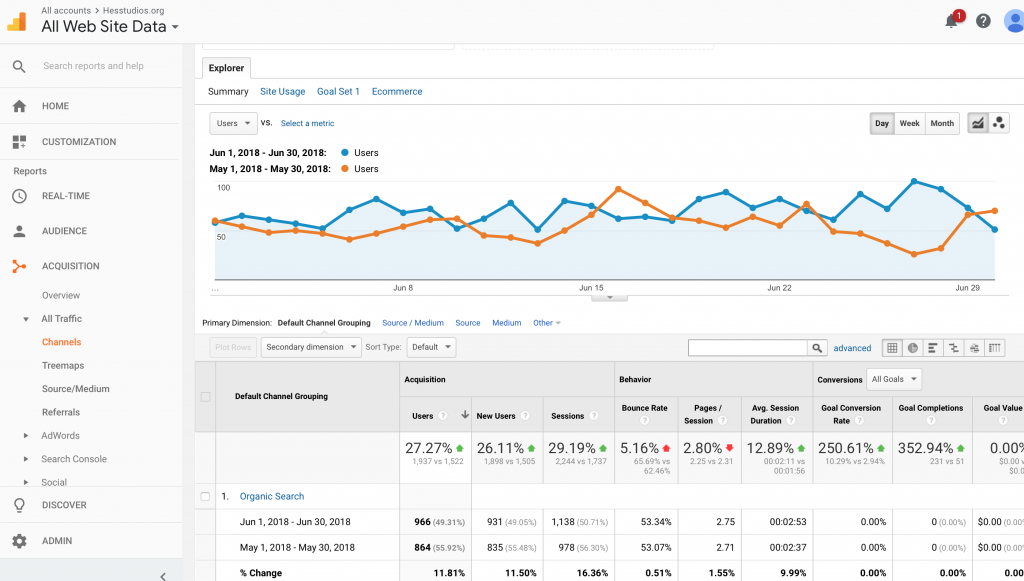 “I’m very pleased with this company so far. Ali and the entire team are both professional and personable. I would recommend them to anyone *except my competition! :)”

Andrea Gatlin is the proud owner of Hess Studios. She rents out small spaces to hair and nail specialists. But she also wants them to succeed, so she promotes their services through her main website: www.hesstudios.org.

She contacted us in April and was thrilled to learn that we do not charge anything until her site ranks better on Google. Thereafter, Andrea pays based on how much we are able to improve her site’s presence on Google.

We signed the agreement and started the work on her sites. Within just two months, we were able to improve her site’s rankings from 49% visibility on Google to 63%.

This has resulted in a huge increase in the number of calls her studio is receiving from those finding them on Google.

In June, 2018, her business received 231 calls compared to 51 calls in May. This is an amazing 353% increase in the number of calls she is receiving.

Out of these calls, 209 were generated through organic search (mainly Google).

This is just the beginning of the project. Soon, Andrea will see higher positions on Google for her main keywords along with consequently higher numbers of visitors to the site and more calls.

If you have any questions, or if you want to boost your site’s traffic and leads using our pay-per-lead Google SEO, give us a call at the number above or fill out our Get Started form (also at the top).